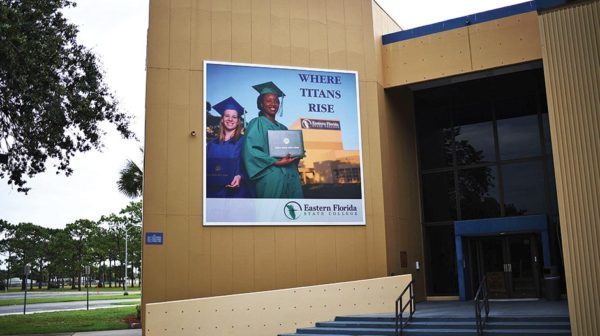 That is to say, our service team was recently on site at four campuses that comprise Eastern Florida State College in order to change out banners in the hardware systems that were installed in 2013.

The school was officially renamed at that time with the introduction of 4-year programs in health care and business management. And with the name change also came a new logo, and the need to build recognition for their expanded programs of study.

The tagline for that campaign was “Look to the East”. Four years later, new students fill the halls and it was time for an updated slogan.

EFSC’s new tagline (“Where Titans Rise”) and photos of undergrads and recent graduates replaced each and every graphic system at all four campuses. An increasing range of sports teams and athletic facilities were also Titan-branded with player images and EFSC blue.

In the fall of 2017, students were greeted by colorful new light pole banners along the boulevards and parking lots, marquee decals, and several framed systems as large as 16′ square can be seen from nearby roads. And in common areas inside of buildings, large format murals display the new collegiate branding and scenes of students and graduates.

Like many of the other Florida community colleges, Brevard Community College expanded its educational mission to provide affordable Bachelor’s Degree programs beginning with two business-related bachelor’s programs in 2013 that prompted the name change to EFSC.

More than half a century since it was founded, over 15,000 students take classes each year on one of Eastern Florida State College’s four brick-and-mortar campuses that span 544 acres throughout the county.