The opening game of the 2015 Major League Baseball season was played recently as the St. Louis Cardinals faced the Chicago Cubs on a chilly spring evening at Wrigley Field, and this was to be every fans’ first glimpse of the $575 million dollar, 4-year renovation underway at the century-old ballpark.

This was the only game of the night on Sunday in early April, and millions of baseball enthusiasts across the country were eager to see the season finally started. 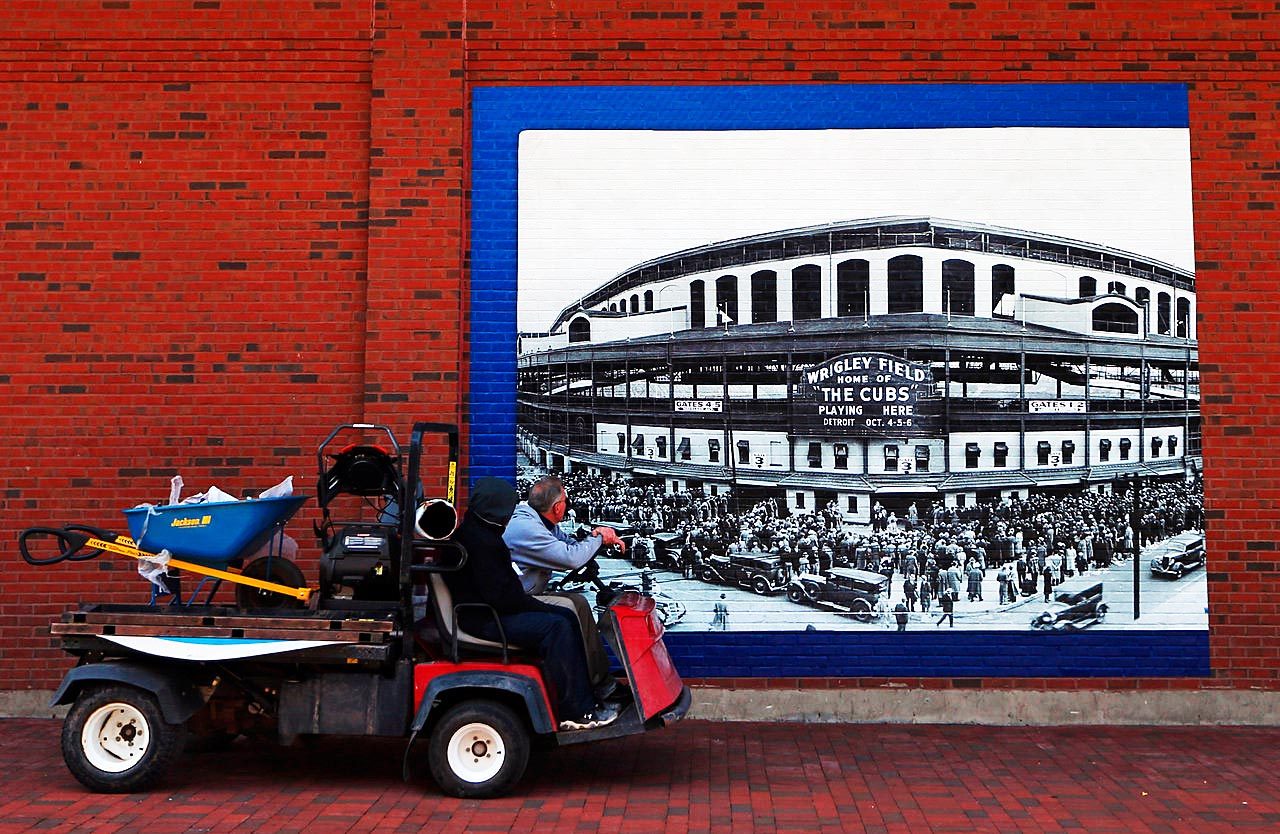 As it would happen, brutally cold winter temperatures and legal complications had disrupted construction on the ballpark and caused delay, leaving the bleachers unfinished for Cubs fans and the national television audience. Huge mesh banners covered the bleachers in portions of left, center and right field.

The Cubs organization used this opportunity to honor the legendary Ernie Banks who played his entire 19-year major league career with the Cubs. “Mr. Sunshine” was a perennial all star, won the National League MVP vote twice, and passed away on January 23rd, 2015 at the age of 84. He was beloved by Cubs fans, active in the Chicago community and even President Barack Obama called Banks “an incredible ambassador for baseball, and for the city of Chicago.”

And as I was watching the broadcast and admiring the Banks tribute banners that we’d produced here at Britten Inc, a friend of mine sent me a message about “advertising pollution being everywhere, convincing people to buy things they don’t need” (expletives removed for the faint of heart). Which got me thinking, doesn’t Major League Baseball and advertising go hand in hand… every bit as much as baseball and apple pie?

Baseball’s origins in North America can be traced back as far as the 1850s, with a craze for the sport breaking out in the New York metropolitan area with several area teams competing in makeshift baseball parks, and “our national pastime” was officially born.

“Buy me some peanuts and Cracker Jack,” goes the song. But even prior to 1908 (the year that “Take Me Out to the Ballgame” was penned), baseball and advertising have been quite entrenched since its earliest days.

I did a little research and was surprised to find how little has changed! 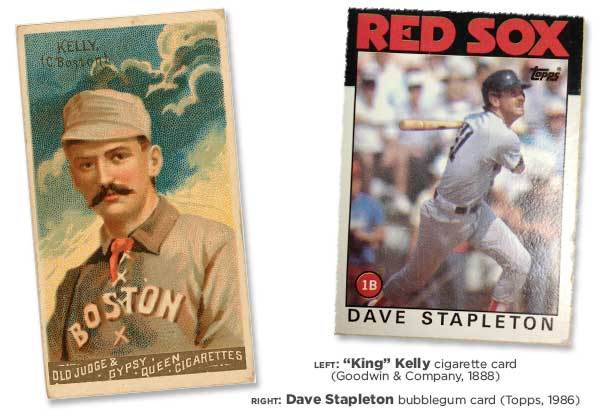 Whereas kids from my generation will probably always associate baseball and bubble gum, the original trading cards were originally created as a value-added incentive for any variety of products (most notably, tobacco). And the cards weren’t just for baseball, either. The advances in color printing during the mid-19th century coincided with baseball and photography’s growing popularity, which made trading cards a pastime enjoyed by many in the days before television or color newspapers. These sets typically consisted of 25 or 50 related subjects including famous actresses and models, military heroes, flags, even flower & bird species. Typically, a trade card of the time featured an image on one side and information advertising the business on the other.

“In 1868, Peck and Snyder, a sporting goods store in New York, began producing trade cards featuring baseball teams. Peck and Snyder sold baseball equipment, and the cards were a natural advertising vehicle. The Peck and Snyder cards are sometimes considered the first baseball cards. By early 1886, images of baseball players were often included on cigarette cards with cigarette packs and other tobacco products. This was partly for promotional purposes and partly because the card helped protect the cigarettes from damage. By the end of the century, baseball had become so popular that production had spread well beyond the Americas and into the Pacific Isles.” (wikipedia.org)

But everyone knows that it’s really about the baseball cards, not the bubble gum! 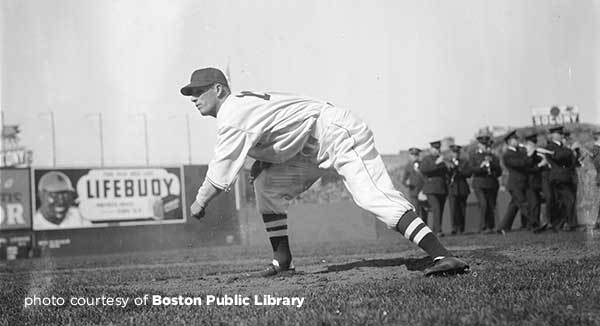 While many billboards promoted brands of tobacco, alcohol and soda, not all advertising fell into the category of “stuff we don’t need”. Take for example Lifebuoy soap, introduced by Lever Brothers in 1895 in England. Their brand appears on outfield billboards of several East Coast ballparks during the 1920s & ’30s (shown above is Fenway Park).

In nearby Philadelphia, the Baker Bowl was initially built as a ballpark for the Phillies in 1887. The original fence was only 280 feet from home plate (relatively generous by today’s standards) and an easy home run target, so various extensions were added over time until a 60-foot barrier was erected. One of the largest billboards on record, this massive wall dwarfs the Green Monster at Fenway Park (only 37′ high by comparison, and 320 feet from home plate).

When the home team played at the Baker Bowl during the 1920s, an outfield wall advertisement for Lifebuoy stated, “The Phillies use Lifebuoy”. At least one detractor of the losing club was known to have said, “And they still stink”. 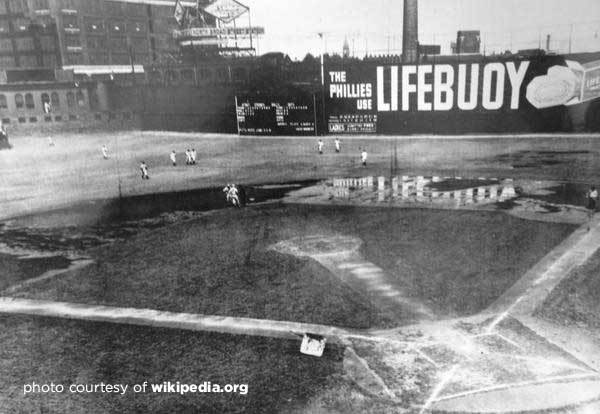 Other advertisements for razor blades, suits, auto service or hardware stores were commonly found on baseball billboards. Delano Hat can be seen prominently in the photo below (and judging by the crowd in attendance, business was very good).

The ad next to it, however, appears to have been very political in nature. This billboard during the 1912 World Series read, “Thomas W. Lawson offers $250 to any batter who hits this sign. $1000 to the first who smashes The System’s Slate.” Thomas Lawson was a Bostonian businessman and proponent of financial reform. After his split with John D. Rockefeller he wrote extensively against Standard Oil, which was ordered in 1911 by the US Justice Department to breakup into separate companies under antitrust law. Lawson’s “The Remedy” was published that year in installments in Everybody’s Magazine, also mentioned on this billboard.

Modern billboards are still around, but if anything, they’ve been tamed down a bit! 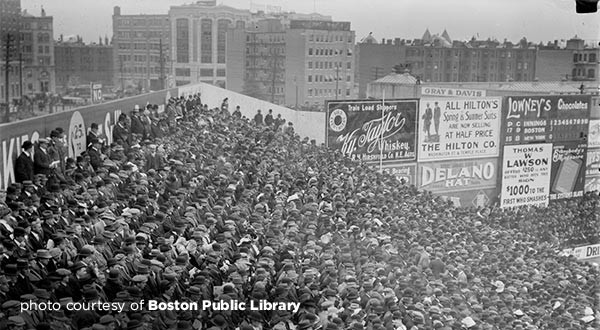 A Brief History of Baseball in Japan

While there are very slight variations in the rules, baseball (or 野球 in Japanese, combining the characters for field and ball) dates back almost as far and is equally as beloved by the people of Japan.

The game was introduced in 1872 at the Kaisei School in Tokyo by an American professor named Horace Wilson, who felt it would be a good source of exercise for students. The team sport caught on rapidly and as competition between universities increased, it was common for universities to send athletes to America to improve their game dating as far back as 1905.

It was routine for minor and major league players from America to play in exhibition games in Japan during the 1910′s and 1920′s, including one All Star team in 1934 that included Babe Ruth and Lou Gehrig, among others.

Japan founded its first professional team in 1920 and grew big enough to divide into two leagues (known Nippon Professional Baseball, or NPB) in 1950. Whereas in America teams are identified with a city, in Japan they are owned by companies such as newspapers or railway providers (for example the Hashin Tigers).

Over 50 players from the NPB have joined the rosters of Major League Baseball, a trend which has increased steadily ever since Hideo Nomo came to play in the U.S. in 1995.

And now even Japanese language advertising in showing up in American ballparks; when Hideki Matsui joined the Yankees in 2003, certain companies purchased signage in right field (where Matsui played). 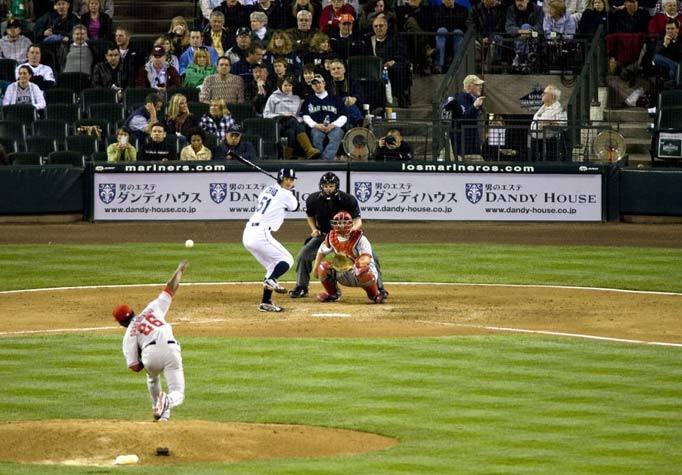 Perhaps the most coveted advertising location these days is the highly visible signage behind home plate. The overseas audience is evidently tuning in, and major brands like Nintendo have demonstrated their financial interest in reaching this audience. Shown above, Dandy House is a chain of men’s spas and their advertisement is seen at Safeco Field in Seattle, circa 2009.

And what’s truly remarkable to me is the history and global appeal of this sport.

Whether it’s besbol, or 野球 , or just good ol’ fashioned hardball, advertising has been there since virtually day one.

Baseball advertising is big business, and it continues to reach an impassioned audience at the ballpark, or on the radio, or on your television set (even on your computer, or handheld device).

Fast forward to 2015, and in today’s global economy, a banner is printed in Traverse City, Michigan. Where it appears behind home plate in a rotational display at a ballpark in Seattle. Where it reaches an audience in Japan.

To all the teams in all the lands… Best of luck to your team this season, and please pass the peanuts and Cracker Jack!